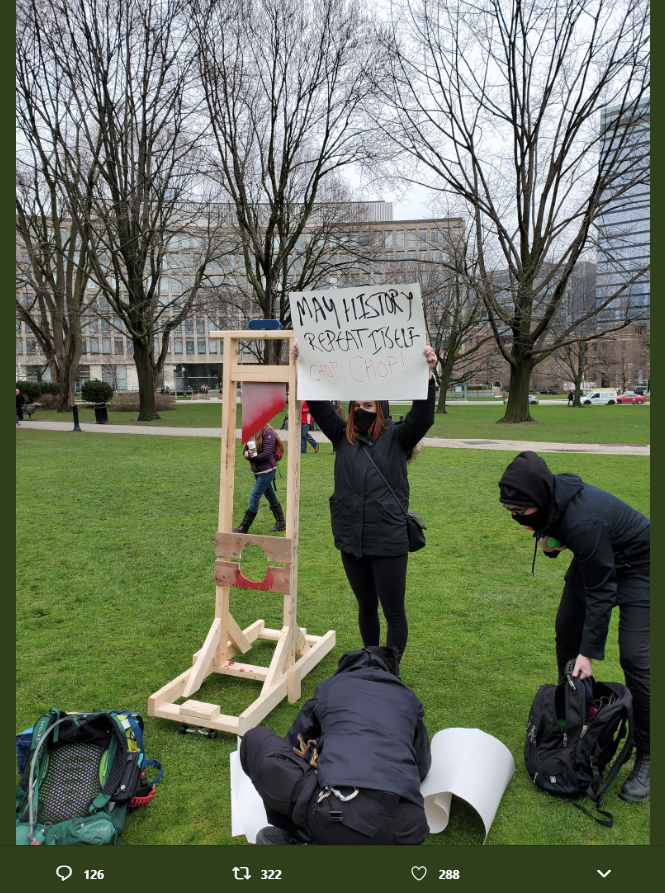 This week there was yet another protest outside Queen’s park because #fuckford. It will forever be the conservative burden to inherit deficits in the billions, make the unpopular decisions necessary to balance the budget. Then they inevitably find themselves dethroned by tax and spend liberals who go back to running up deficits. We have created a culture in our politics where funding is commensurate with compassion. And unless we’re spending money on it, we don’t care about it.

By the way, ignore the marxist flag donning the hammer and sickle. Marxism is a conservative conspiracy. It doesn’t exist on the left or in academia or anywhere. The marxist lie is a conservative straw man. It’s probably photoshopped, right? PAY NO ATTENTION TO THE MAN BEHIND THE IRON CURTAIN!

What’s been really bothering me since the election is to see the change in Andrea Horwath. The language she’s been espousing has been increasingly unparliamentary and she now has taken a position to simply oppose anything and everything proposed by this conservative government. The latest example was her absolute opposition to free dental care for seniors. I believe Horwath is now in part responsible for an increase in vitriolic anti-government activism we’re seeing unfold.

TVO featured “Ontario’s new political landscape” where a panel reacted to the election results where Brittany Andrew-Amofah of the broadbent institute literally said, “what happened last night was a false majority that can only be produced under a first-past-the-post system.” Keep in mind that the conservatives took 76 seats out of the total 134 seat legislature, the NDP won 40, the Liberals 7 and the Green 1. To form majority a party only needs 63 seats. With 76 seats awarded to Doug Ford’s PC government, I have no problem speculating that even if we had used a different method besides first-past-the-post we likely still would’ve seen a conservative majority.

What Brittany is really saying that unless they have a political party who promotes their ideologies then that government will be illegitimate in their eyes. In the panel discussion Steve Paikin asks Brittany, “Are you prepared to give this guy a chance or do you see job one right now as defeating him?” This was Brittany’s response:

I see job one right now as amplifying the need for progressive movement within our province and also discussing what will potentially be at stake. So the search for efficiencies is a very scary search. Where are we going to be cutting from? Where are the efficiencies going to be coming from? And I think that needs, that deserves interrogation and hasn’t been interrogated enough. When we talk about efficiencies are we talking about social services? Are we talking about the money that is being given to our shelter system?

Steve’s interrupted by Brittany, “as in depth as it probably should be.”

“Or might be,” Steve continues, “but he’s got something to say about these things. Does that help you at all?”

Brittany, “no, because this party has been focussed on talking about efficiencies and talking about cleaning up what’s happening at Queen’s Park. Yes, Wynne has gone wrong and maybe several different areas when it comes to hydro, when it came to a number of different issues but there are a lot of progressive gains that need to continue to be made and that needs to be built upon from when Wynne had left. So I think that’s a risk here and if we’re focussing solely on his (she then performs air quotes) “search for efficiencies” then I don’t know how true those statements are.

Let me remind you that the recording of this episode took place the day after election day. This is her reaction to the conservatives the DAY after election day. What we see here isn’t a realistic critique of job performance or policy legislation, this is her simply disqualifying the new majority government as elected by the people due to nothing more than their political identity. This is what hyper partisanship looks like. She sits there and equates budget cuts to punishment and uses it to fear monger that this government will use their power to punish the weak and marginalized. It’s not a political analysis, it’s a post-modern style deconstruction framed around intersectional narratives. Notice her inability to acknowledge minority group support for Doug Ford and Ford Nation? Because it’s counter narrative, which could never be true, so it’s obviously just lies. Conservative Rhetoric. Misinformation. Fake news. Far-right conspiracies. etc, etc, etc.

This was the rhetoric coming out of those left of the political spectrum the day after election day. The NDP put forth more radical candidates than ever before. Like Laura Kimiker who ran in my riding of Mississauga Center was a self described Marxist and called Poppies war glorification. I’ve greatly respected Andrea Horwath throughout her role as opposition throughout my lifetime watching provincial politics. She’s a veteran in the game and I truly believe she sincerely advocates for truly vulnerable people and for opening opportunities to everyone. However she’s seen how greatly her party benefited from a more populist, radical campaign message and she’s changed her tune to appeal to exactly this populism.

That’s why Andrea Horwath today has no problem openly calling Doug Ford a ‘dictator’. Which if it came from a conservative, would be called a dog whistle promoting violence and hate. So what is it when it’s done on the left? Oh, NOW it’s just free speech. Horwath has the freedom to express any view she wants. And I’m equally allowed to call her a silly fucken hack for choosing to do so. I believe the more she shifts towards the social radical marxist types, the more she will dispossess the grass roots supporters of the parties who just wanted better health care, not a marxist reform. My prediction is once the party is nothing but radicals then this will simply disqualify them and I think we will see more surge in Green support as an alternative to what has been the alternative for decades. I think Green will replace the NDP.

She’s had no problem throwing out slurs, parliamentary disruptions, calls to activism and yet she refuses to take responsibility for how discourse has been changing around Queens park. If you only pay attention to the mainstream news outlets, CTV, CBC, Macleans, etc, you’d believe that the only reason conservatives are surging in support around the country is believe of Facebook fake news and white supremacy. When in reality we’ve seen, in my opinion, more openly hateful protests against conservatives than anyone else.

The following images were taken from the office of MPP Laurie Scott’s office upon amending the minimum wage bill. 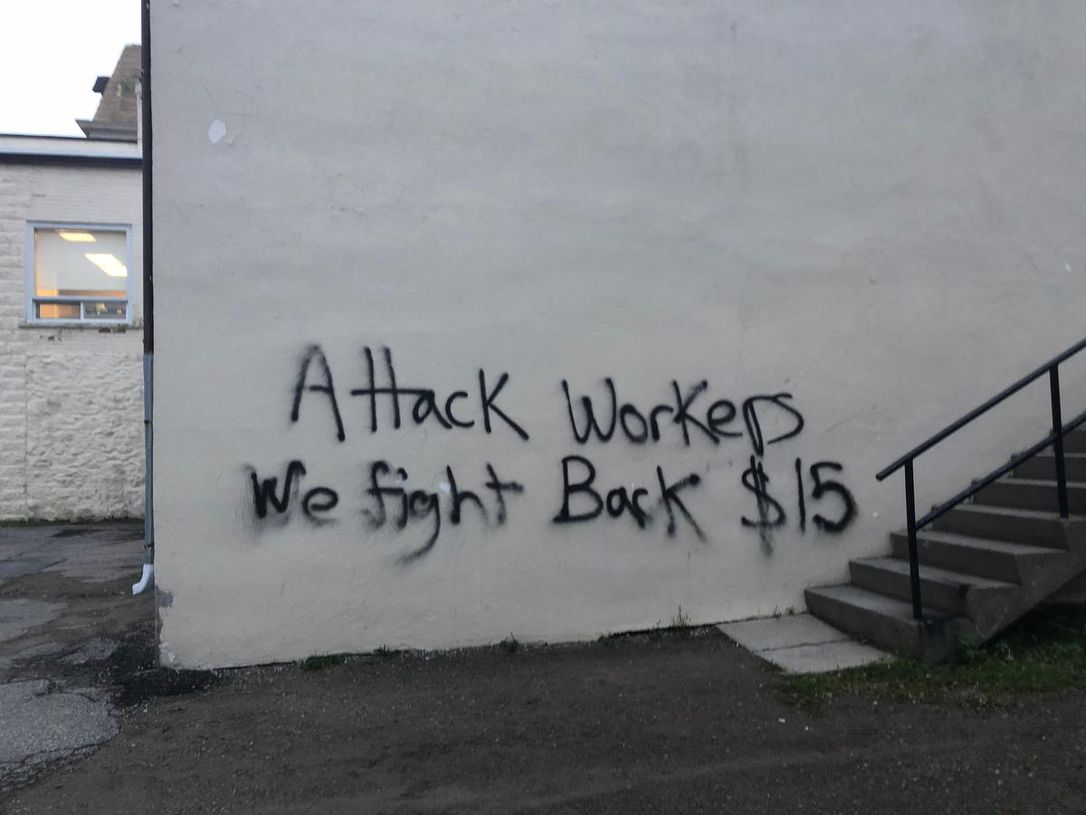 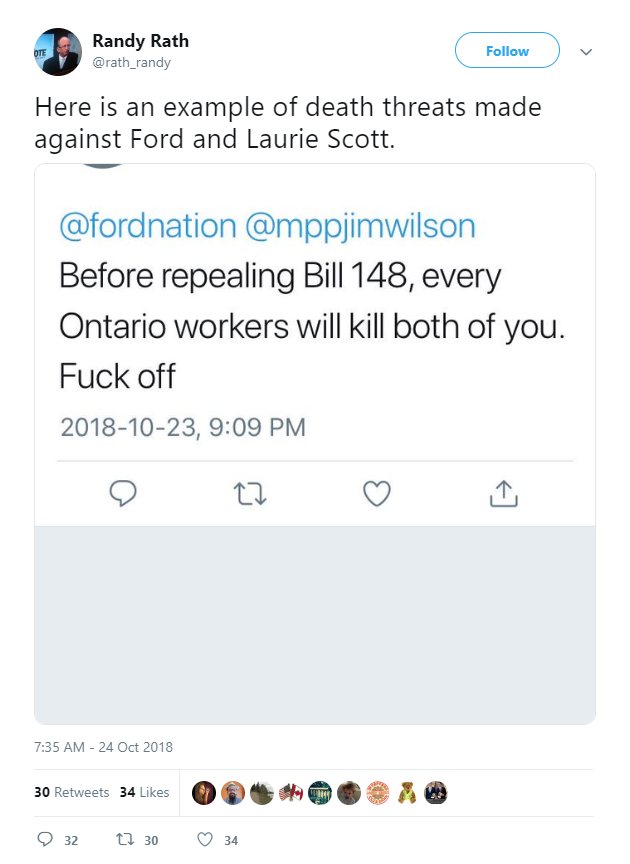 Several months ago truckers from around the country rallied and drove to Ottawa to show their support for pipelines. They donned yellow vests inspired by french protests against their carbon taxes. They felt Trudeau has turned his back on Albertans and waste billions of dollars and Saudi Oil rather than cycling it back to the Canadian economy. There were online forums where these people organized and shared talking points. Apparently some have shared anti-immigrant sentiments. Faith Goldy and Rebel Media also attended the protest. The media took these details and slandered the entire protest as one of promoting hate and violence. The convoy was portrayed as just a group of white supremacists. The usual slurs aimed at disqualifying dissent and aimed at banning wrongthink. 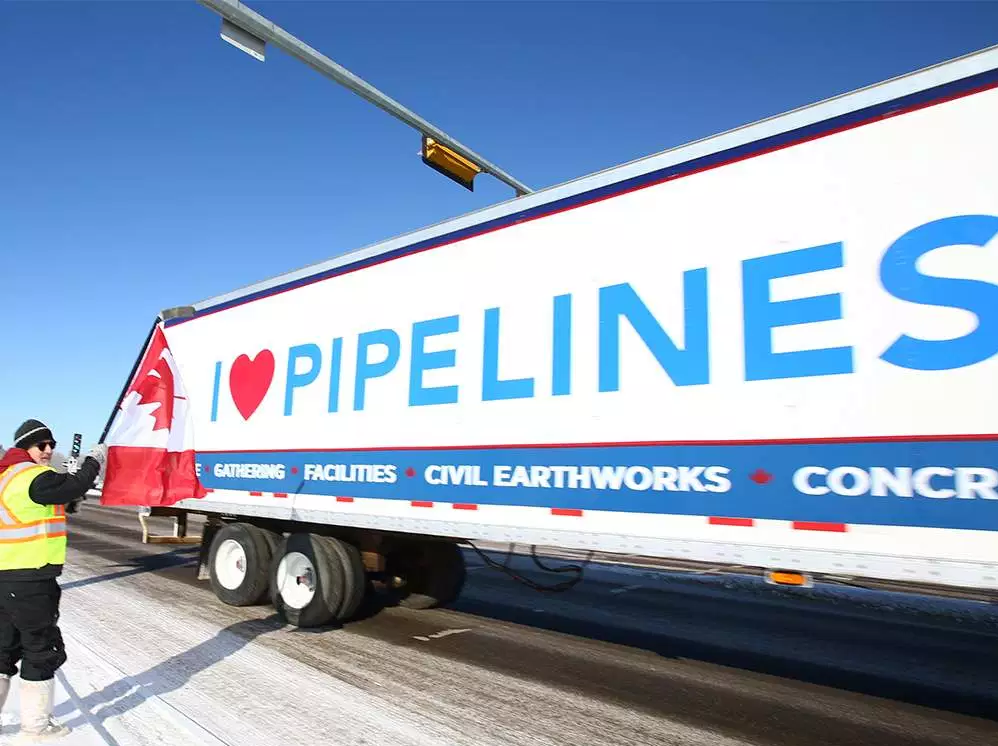 The only point I’m making here is simply this. Populism is increasing as polarization increases. This is not just happening among conservatives but also with liberals. If not more. We all need to hold ourselves accountable at the individual level. But this is just another example of the media’s bias against conservatives. Conservatives simply show up to peacefully protest and they’re labelled racists. But if you’re protesting conservatives, that’s just your civil right. Despite how inappropriate your conduct is.

Like, what exactly are they trying to say here? If you question social justice initiatives you disqualify yourself from public discourse? Well, that seems to be the case from what I’m seeing media wide. You watch how the media treats Scheer or Ford versus how they treat Trudeau and Horwath and it’s easy to see. If you have anything to say about Trudeau’s #welcometoCanada? Guess what, you’re a nazi. Bring a guillotine to Queens Park and behead an effigy of Doug Ford? That’s just you’re civil right.

Do these people have a right to call for the death of politicians? Actually no, that’s incitement of violence. Murder and policy critique are two very different things. If I followed the same logic that the social justice leftists follow then Andrea Horwath would be a Marxist for having posed for pictures with a group who had Marxists among them. However I don’t follow social justice logic so, no, I don’t think Andrea Horwath is a Marxist by association. But when she’s posing next to a skeleton and signs reading #fuckford then I simply have this to ask you. What if roles were reversed and it was Doug Ford protesting an NDP government by posing with skeletons and hashtags #fuckhorwath. All media everywhere would be reporting this as a KKK rally. So if it would be inappropriate to one party, it should be equally condemned on the other front.

But what we’re seeing here isn’t any effort to consider any of that. Even if this conservative government for some reason matched the same policies as the previous liberals and their government mirrored one another, you would still see vitriolic protests. There is nothing this government can do to appease the angry social justice mob. It’s not about the cuts or the budget. It’s about capitalism and hatred. Hatred for everyone who disagrees with the social justice narrative. Feminist narratives of empowering women fall short when conservative female MPPs need to hire security over death threats. It is literally and metaphorically a call for the death of our political system and a call to complete reform to socialism. And while the conservatives come under constant attack on all fronts, they’re tasked with saving this province from itself. Remember this in 3 years when we’re back at the ballot box.

Even Slavoj Zizek himself thinks that political correctness is exactly what perpetuates prejudice and racism. So put that in your Marxist Vape Pens and smoke it 500 metres away from any public entryway.

“one needs to be very precise not to fight racism in a way which ultimately reproduces, if not racism itself, at least the conditions of racism.” – Slavoj Zizek

Published by THE 301 CHAMP

Want to get something off your chest? Stop self censoring yourself and speak from your heart. Let's have a real discussion. View all posts by THE 301 CHAMP